Amsterdam (2 nights)
Accommodation 4* hotel; 3 breakfasts from sustainable sources (welcome breakfast included); city walks on and off the beaten path along the UNESCO world heritage canals following the footsteps of Rembrandt; a sustainability tour where you learn about the intrinsic relationship with the water, the bicycle culture, and how the city is taking the lead in building a zero-emissions future.

Not included Flights to/from Amsterdam; Dinner in Gouda; Entrance fees and excursions (not mentioned under inclusion); Drinks on board; Personal insurance; Gratuities (at your discretion); E-bike rental; Dietary requirements on request.

Tour Dates May to September 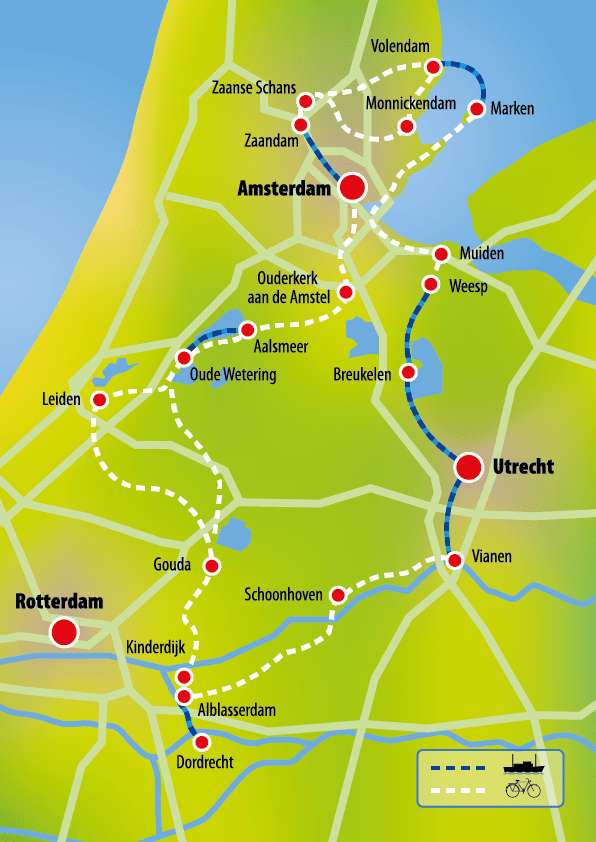 Day 1 -2: Amsterdam City walks on and off the beaten path along the UNESCO world heritage canals following the footsteps of Rembrandt; a sustainability tour where you learn about the intrinsic relationship with the water, the bicycle culture, and how the city is taking the lead in building a zero-emissions future.

Free time to explore the city.

Day 3: Amsterdam | Amsterdam – Zaandam  (Approx. 1 – 5 km | a few yards – 3 miles) Embarkation in the center of Amsterdam at 2 pm. Just before dinner the ship will make a short cruise to Zaandam. In Zaandam, the ship moors in the center or near the open-air museum Zaanse Schans, famous for its 18th-century wooden houses and windmills.

Day 4: Zaandam – Zaanse Schans museum – Waterland – Volendam (Approx. 33 km/21 mi. or 43 km/26 mi.) Start off with a tour of the open-air museum Zaanse Schans. Make sure you don’t miss the cheese factory or the warehouses where clogs are made. Climb up to the deck of the mill, watch the sails turning and enjoy the beautiful view. Continue cycling through small villages in the beautiful wetlands of Waterland to Volendam (2 cycling options – shorter and longer). Dinner on board in Volendam, the small and picturesque fishing harbor on the shores of the Lake IJsselmeer.

Day 5: Volendam – Marken (ferry) | Marken – Waterland – Muiden – Weesp (Approx. 35 /22 mi or 45 km/28 mi) After breakfast, you will take the ferry to Marken, an authentic Dutch village that was separated from the mainland by a storm in the 13th-century. To help avoid the wet feet people built their houses on knolls and poles. Walk along the authentic wooden houses, take a stroll to the lighthouse or check-out the old clog-making workshop. After Marken, continue cycling along the coastline towards IJburg, a new and modern part of Amsterdam that was recently built on reclaimed land from the sea. From thereon you’ll cycle to the historical town of Muiden with its 14th Century castle, the Netherlands’ most picturesque medieval castles. You will meet the barge in the nearby village of Weesp. Enjoy a three course dinner while cruising. Evening and night on board in Vianen, a small fortified town on the lower Rhine River.

Day 6: Vianen – Schoonhoven – Alblasserdam | Alblasserdam – Dordrecht (waterbus ferry)  (Approx. 22/14 mi or 48 km/30 mi) Today the longer tour starts from Vianen along the River Lek (lower Rhine) to Schoonhoven, a city dated back since 1280, also called the ‘Silver City’. Next, you will cycle through the beautiful grassland of Alblasserwaard polder to Alblasserdam, where you will take the Waterbus ferry to Dordrecht. Dordrecht is one of the oldest cities and  played a pivotal role in the formation of the Dutch Republic. Here in 1572, a secret meeting was held to plan the the rebellion against the Spanish occupation. This First Assembly of the Free States laid the foundation for the birth of the Dutch Republic and paved the way for growth during the Golden Age.  After dinner, take a stroll through the historic harbour and step back in time to Golden Age Dordrecht — many medieval houses, courtyards, gates, quays are still intact.

Day 7: Dordrecht – Alblasserdam (waterbus ferry) | Alblasserdam – Kinderdijk – Gouda (Approx.37 km/22 mi. or 52 km/33 mi.) After breakfast you will return by Waterbus to Alblasserdam. This is where a short cycling tour takes you to the famous 19 windmills (built around 1740) of Kinderdijk, a UNESCO World Heritage site. It’s an iconic scene and a symbol of the intrinsic relationship that the Dutch have with the water. Continue cycling to Gouda, the cheese of Holland. During the afternoon and evening, enjoy one of the most beautiful historic city centres in Holland or visit the Cheese Weighing House. Enjoy a wonderful dinner in one of many great restaurants in Gouda. Night on board the barge in Gouda. Optional cycling option: an additional afternoon round tour from/to Gouda: 20-25 km.

Day 8: Gouda – Leiden – Oude Wetering (Approx.33 km/21 mi. or 52 km/33 mi.) Today’s cycling tour starts in Gouda and shows you the typical scenery of the so-called Green Heart of Holland with green landscapes, wide views, small canals and tiny lakes – all below sea level! The optional longer cycling tour leads via Leiden, the birthplace of  Rembrandt and residence of the oldest university of the Netherlands. Dinner, evening and night on board in the small village of Oude Wetering.

Day 9: Oude Wetering – Ouderkerk aan de Amstel – Amsterdam (28 km/18 mi)  Today you cycle from Oude Wetering along the Amstel River via Ouderkerk aan de Amstel into Amsterdam. En route you can visit a cheese and clog farm. The Amstel River is the eponym of Amsterdam. For the optional shorter cycling tour you can stay on board for the first part and cross the Lake Westeinder. Start your cycling tour in the outskirts of Amsterdam, ride through the Amsterdamse Bos (forest area) and the Vondelpark. Don’t forget to stop by the organic farm in the Bos to sample some cheese and play with baby goats. Dinner on board in Amsterdam. In the evening, you can take a stroll along the canals of old Amsterdam (UNESCO cultural heritage). A wonderful end of your trip!

Day 10: Amsterdam, end of the tour Check-out and disembarkation after breakfast. Depart for home.

Boat & Bike Tour  You will sleep on board of some of the most beautiful passenger barges cruising the European waterways. Every day you will ride with the group or on your own while your floating hotel sails to the next harbour. In the evening, you are back aboard for a chef-quality three-course meal (with a selection of local food and regional wines).

Fully guided or self guided During this premium bike tours you will be accompanied by two skilled, professional and multilingual tour leaders (from 18guests). Each evening the tour leaders will discuss the plan for the next day. On most days there is a choice between two cycling options: a shorter/longer or quicker/slower tour. The tour leaders will join you and shows you the interesting sights along the route. He or she can make repairs to the bike if necessary. If you prefer to wander off by yourself for a day, there are maps available and the tour guide will give you all the information you need. You can also use the GPS tracks of this tour. And if you don’t feel like cycling for a day (or more) you are welcome to relax and stay on board while the ship sails to the next harbor.

Cycling routes Easy or easy to moderate most of the way over flat paths. Suitable for all cyclists, from very experienced to recreational cyclists with a basic level of fitness.

Bicycles Unisex touring bicycles with gears, hand and pedal brake and a pannier bag. Other bikes (e.g. E-Bikes, children’s bikes) available on request. Helmets available on board (for free).

Barges The beautiful hotel barges accommodate a maximum of 36-40 guests. This ensures that the level of service is kept to the highest possible standard. Each barge has been lovingly crafted and the crew will do their utmost to ensure every expectation is exceeded during the trip.

Meals on board are sustainable and healthy. Fresh, local produce is delivered daily and prepared with great pride by the chefs in the professional restaurant kitchens aboard. Breakfast will be served as a buffet and during breakfast you can make your own packed picnic lunch for your bike tour. In the evening the chef serves a three course dinner. One evening during this tour, dinner will be at a restaurant of your choice (not included, restaurant recommendations on board).

The planned itinerary is subject to change due to nautical, technical or meteorological reasons and other unforeseen circumstances. The captain reserves the right to change the route for safety reasons. 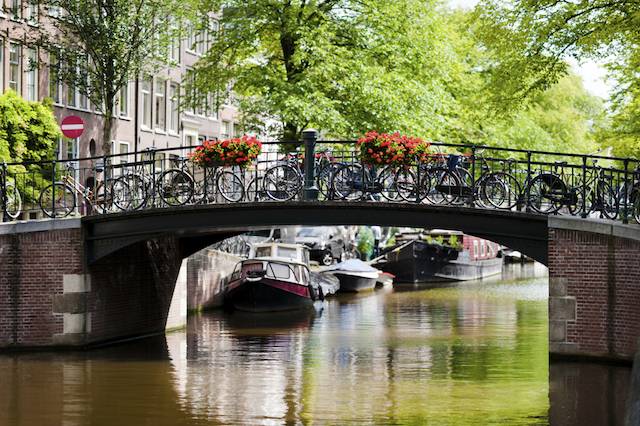