Amsterdam (2 nights)
Accommodation 4* hotel; 3 breakfasts from sustainable sources (welcome breakfast included); city walks on and off the beaten path along the UNESCO world heritage canals following the footsteps of Rembrandt; a sustainability tour where you learn about the intrinsic relationship with the water, the bicycle culture, and how the city is taking the lead in building a zero-emissions future.

Not included Flights to/from Amsterdam; 1 Dinner in Bruges or Antwerp; Entrance fees and excursions (not mentioned under inclusions); Drinks on board; Personal insurance; Gratuities (at your discretion); E-bike rental; Dietary requirements on request.

Tour Dates May to September 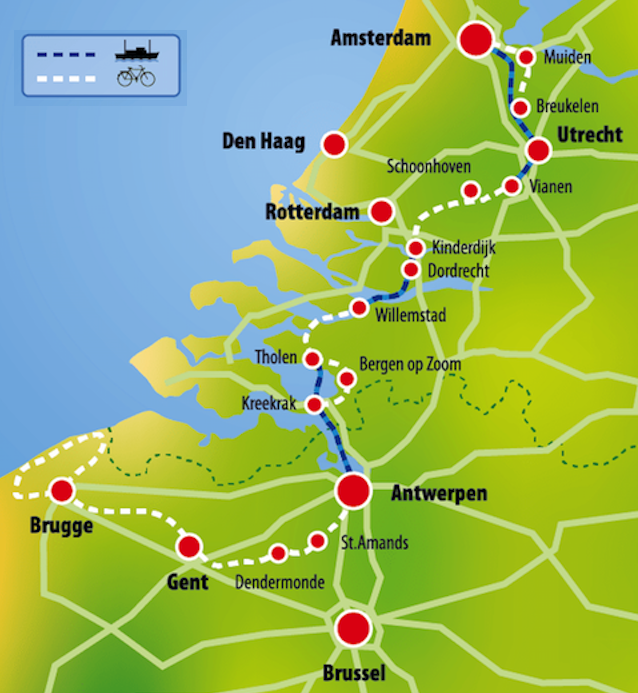 Day 1 -2: Amsterdam City walks on and off the beaten path along the UNESCO world heritage canals following the footsteps of Rembrandt; a sustainability tour where you learn about the intrinsic relationship with the water, the bicycle culture, and how the city is taking the lead in building a zero-emissions future. Free time to explore the city.

Day 3: Amsterdam | Amsterdam –  Vianen  Embarkation and check-in, the crew will welcome you on board. At around 2 p.m. the ship will depart from Amsterdam for Vianen, a small fortified village on the Lek River. After dinner you have the opportunity to enjoy a short first test ride through the surrounding area.

Day 4: Vianen – Schoonhoven – Kinderdijk  |Kinderdijk – Dordrecht(32 km/19 mi. or 56 km/34 mi.) Today you will cycle along a beautiful route to Schoonhoven – nicknamed Zilverstad (“Silver City”) – a city renowned for its talented silver smiths since the 17th century. Later in the day as you cycle through the Alblasserwaard region you will reach Kinderdijk,with its famous windmills (built around 1740), a UNESCO World Heritage site– you will have the opportunity to visit onelearn about over 1000 years of battle with the water. From nearby Alblasserdam you will take the “Waterbus”, a fast ferry, that will take you and your bicycle in approx. 10 minutes to Dordrecht, one of the oldest towns, played a pivotal role in the formation of the Dutch Republic. Take a stroll through the historic harbour and step back in time — many medieval houses, courtyards, gates, quays are still intact.

Day 5: Dordrecht – Willemstad | Willemstad – Tholen |Tholen – Kreekrak lock – Antwerp(36 km/23 mi. or 44 km/28 mi.) As you enjoy your breakfast aboard the ship, the ship will sail to Willemstad where you will start your day’s cycling. Willemstad is a beautiful old fortified town on the Haringvliet waterway. Your bicycle ride goes to Tholen, once was an island in the middle of the large Zeeland streams, where many people fished for their living. Nowadays Tholen is connected to the mainland in various ways and it’s still a picturesque village with many relics of an eventful past.

In the afternoon you will once again board the ship which will sail to the port city of Antwerp, situated on the river Schelde. Antwerp is famous for handling up to 80% of the world’s rough diamonds and is  home to world-renowned shopping, the famous Antwerp Six, majestic buildings from the Renaissance, the historical City Square Grote Market, the Onze-Lieve-Vrouwe Cathedral and the medieval Steen Castle. After dinner you can visit the beautiful old city center.

Day 6: Antwerp – Temse – St. Amands (34 km/21 mi. or 49 km/31 mi.) In the morning you will cycle out of Antwerp along a picturesque section of the Schelde River to St. Amands your home for the night. There is only one way to describe the landscape around the Schelde and that is “magnificent”. It is without doubt one of the natural highlights of the tour.

Day 7: St. Amands – Dendermonde | Dendermonde– Ghent (52 km/32 mi.) Today you will continue to follow the river Schelde to Ghent where the ship will moor for the night at a lock in a suburb of town. Ghent is a lively university city that boasts a rich history. Since Roman times Ghent’s position at the junction of Leie and Schelde Rivers has ensured that it has been a successful trading port.  In total the city features an Opera House, 18 museums, more than 100 churches and over 400 historical buildings. Major attractions are St. Bavo Cathedral where a number of masterpieces of medieval art including the world famous ‘Adoration of the Mystic Lamb’ by Jan van Eyck are kept and the 91-metre-tall belfry of Ghent, one of three medieval towers that overlook the old city center. After dinner a small canal boat will take you for a guided tour through the historic city.

Day 8: Ghent – Bruges (22 km/13 mi. or 45 km/28 mi.) Today you will cycle from Ghent through the beautiful Flemish countryside of western Flanders to Bruges, widely described as the ‘Venice of the North’ and arguably the most beautiful of all the Flemish cities. Bruges attracts more than two million visitors every year who come to see the picturesque medieval town center of the UNESCO World Heritage-listed historic city and a long list of historic attractions. An outstanding example of a medieval historic settlement, Bruges has managed to maintain its historic fabric as it has evolved over the centuries, with the result that today the city’s original Gothic buildings form an integral part of the town’s identity. While you are here you can visit one of Bruges many museums or simply take in the stunning beauty and culture of this unforgettable city from the comfort of a sidewalk café. Dinner tonight  (not included) will be in town in a restaurant of your choice (recommendations available on board).

Day 9: Tour around Bruges to the North Sea (38 km/23 mi or 51 km/31 mi.) Your final day of cycling takes you along a quiet canal and past beautiful poplar trees through an attractive polder landscape (a polder is a low-lying tract of land enclosed by embankments) dotted with small farm houses to the North Sea coast. Here if you want you can swim in the sea along an inviting sandy beach, visit any one of numerous cafés and see the attractive dune landscape. On the return ride to Bruges you will cycle along a small picturesque canal.

Day 10: Bruges, end of the tour Check-out and disembarkation after breakfast. Depart for home.

Boat & Bike Tour  You will sleep on board of some of the most beautiful passenger barges cruising the European waterways. Every day you will ride with the group or on your own while your floating hotel sails to the next harbour. In the evening, you are back aboard for a chef-quality three-course meal (with a selection of local food and regional wines).

Fully guided or self guided During this premium bike tours you will be accompanied by two skilled, professional and multilingual tour leaders (from 18guests). Each evening the tour leaders will discuss the plan for the next day. On most days there is a choice between two cycling options: a shorter/longer or quicker/slower tour. The tour leaders will join you and shows you the interesting sights along the route. He or she can make repairs to the bike if necessary. If you prefer to wander off by yourself for a day, there are maps available and the tour guide will give you all the information you need. You can also use the GPS tracks of this tour. And if you don’t feel like cycling for a day (or more) you are welcome to relax and stay on board while the ship sails to the next harbor.

Cycling routes Easy or easy to moderate most of the way over flat paths. Suitable for all cyclists, from very experienced to recreational cyclists with a basic level of fitness.

Bicycles Unisex touring bicycles with gears, hand and pedal brake and a pannier bag. Other bikes (e.g. E-Bikes, children’s bikes) available on request. Helmets available on board (for free).

Barges The beautiful hotel barges accommodate a maximum of 36-40 guests. This ensures that the level of service is kept to the highest possible standard. Each barge has been lovingly crafted and the crew will do their utmost to ensure every expectation is exceeded during the trip.

Meals on board are sustainable and healthy. Fresh, local produce is delivered daily and prepared with great pride by the chefs in the professional restaurant kitchens aboard. Breakfast will be served as a buffet and during breakfast you can make your own packed picnic lunch for your bike tour. In the evening the chef serves a three course dinner. One evening during this tour, dinner will be at a restaurant of your choice (not included, restaurant recommendations on board).

The planned itinerary is subject to change due to nautical, technical or meteorological reasons and other unforeseen circumstances. The captain reserves the right to change the route for safety reasons. 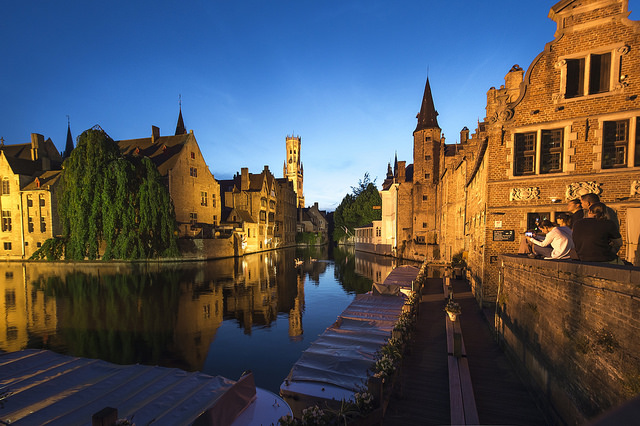